The election of Donald Trump has had a curious effect on peoples’ perceptions of trade. During the 2016 presidential campaign, Pew Research reported that the percentage of Republicans believing free trade agreements to be good for the U.S. was 32 percent, down from 51 percent just one month before Trump began his presidential bid.

Search traffic helps reveal how Americans have reacted to trade headlines. Google searches of “what are tariffs” surged on news of the steel and aluminum duties in March of this year. The share of positive to negative trade related search queries changed as well. Searches for “free trade,” a generally positive connotation, was stable while searches for “tariffs” and “trade war” spiked, overtaking searches for “free trade” for the first time.

Searches related to “tariffs” and “trade war” indicate negative responses to headlines. The interest in these terms relative to the more favorable “free trade” could proxy for voters’ anxiety or unease over trade disputes. I looked at the change in relative search traffic for positive and negative search terms by state between 2013 and 2018 using data from Google Trends. 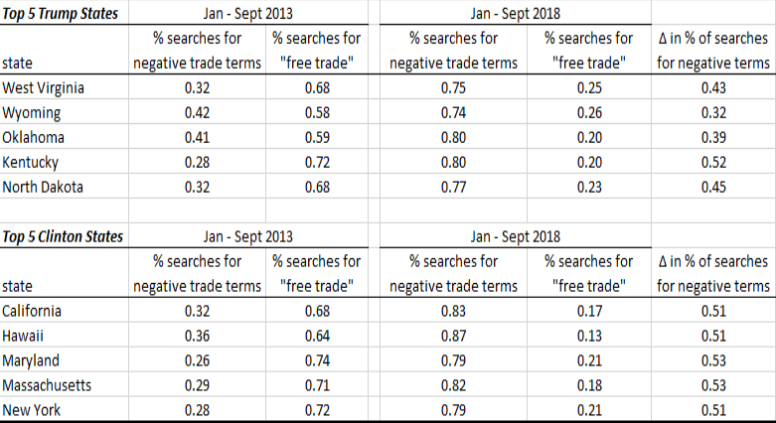 Negative searches rose relative to positive searches in all 50 states but changes were varied. States that voted strongly for Clinton saw the largest shift toward “tariffs” and “trade war” searches in 2018 while strong Trump states saw a more modest change. 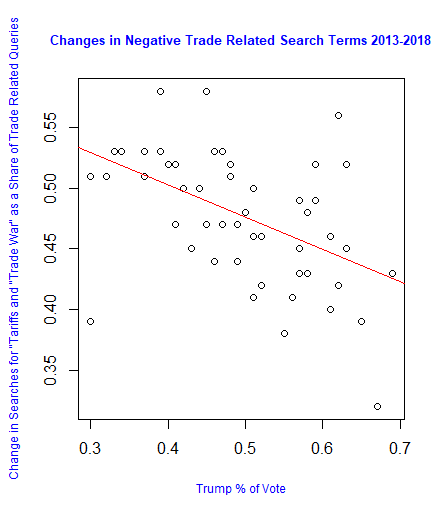 Surprisingly, potential economic losses from the trade war (estimated by the U.S. Chamber of Commerce) are not strongly correlated with the change is search traffic.

I ran a simple OLS regression with the change in searches for “tariffs” and “trade war” as a share of searches for these terms plus “free trade” as the dependent variable and Trump’s vote share, potential economics losses, and dummy variables for different regions of the U.S. (Northeast, Mountain West, Corn Belt, etc.).

The table confirms a negative and statistically significant correlation between politics and changes in trade interest. A 10 percentage point increase in Trump’s share of the vote is associated with a an 18 percentage point reduction in the share of trade searches shifting to negative terms. This suggests trade headlines in 2018 did not incite as much anxiety in Trump heavy states as they did in Clinton strongholds. As we might expect, potential economic losses from the trade war are positively related to searches for “tariffs” and “trade war” but the correlation is weak. A one percent increase in losses are associated with 0.02 percent increase in the share of trade searches going to negative terms.

We certainly can’t infer causality from just this (there are too many unobserved factors related both to political preference and changes in search behavior, e.g. exposure to headline news) but they are some interesting correlations non-the-less.